Find out why Circle.so platform is not a real community platform. What's missing? 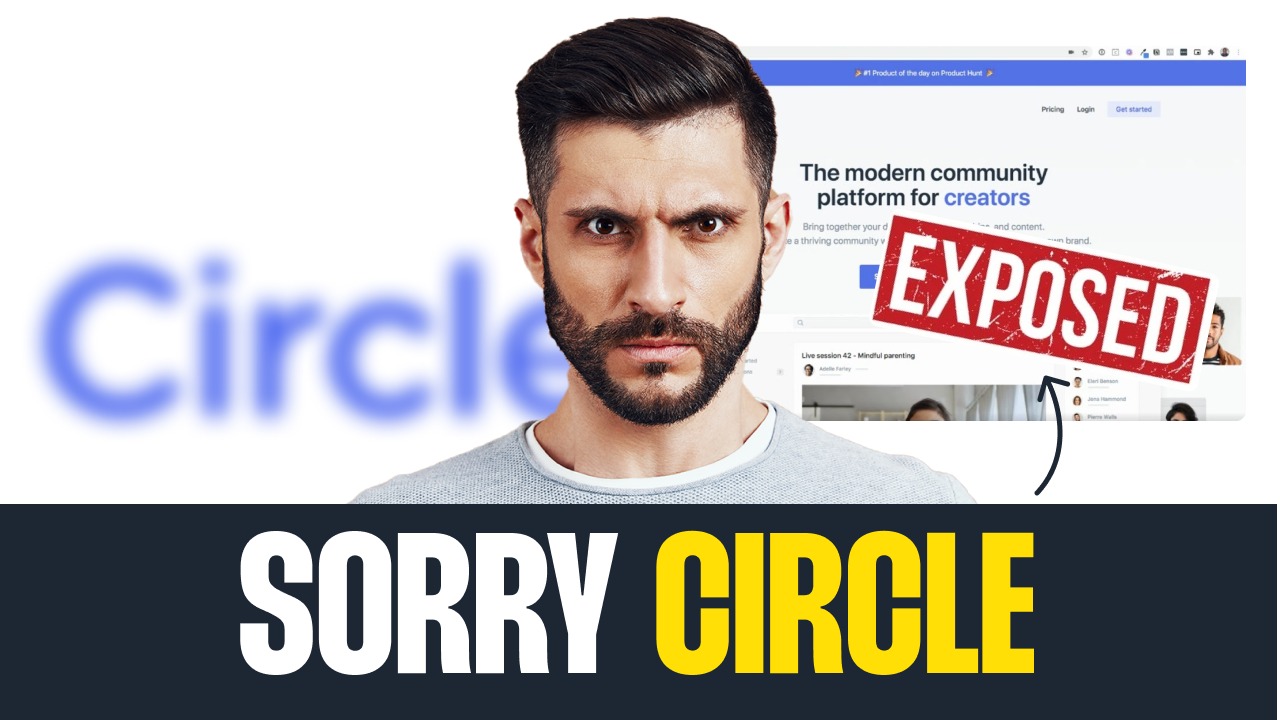 As a community platform for modern-day creators (that has investors like Tiger Global & makers like ex-Teachable folks), I won't deny Circle their due for doing a splendid job.

Instructors on platforms like Teachable always wanted a way to truly engage their learners. The Circle team (having been ex-Teachable employees) knew these motivations. That's when they decided to build a complementary missing piece for them - which came to be known as the circle app.

Circle has memberships, discussions, live-stream, chats, and events all within its platform. All these are important when you think of choosing a community platform for your business. With all these features, it does feel like an all-in-one solution for community building (and the piece that Teachable was always missing).

- What is the problem with this approach?

Teachable, as a learning management system (LMS), solve the management problem for instructors. They are able to organize the instructors' content in a place and let the students access it. Teachable does not take into account the needs and motivations of the learners, hence the low completion rates of courses (<15%).

A community platform is for learners and needs a different DNA. Circle failed to adapt to this DNA of a consumer platform and built it keeping the instructors needs in mind.

An LMS (learning management system) is a B2B product with the instructor as its end-user.

However, a community platform is B2B2C (business to business to consumer)- it is built to engage the end consumer (aka the learners).

Moreover, allowing users to interact with each other on the go becomes a critical piece of the puzzle for engagement. This can only be solved by having a mobile app that sends out push notifications nudging your users to get back into a hot conversation. With over 3900+ communities hosted on Circle.so, the engagement rate of these communities is far less than what it’d be acceptable for a community-led business.

A community DOES NOT only solve the membership problem. It MUST solve the engagement problem. Engagement can't be solved by stacking up features one over the other. Hence, a community platform cannot be built via a SaaS mindset.

A community product is a "social" app - but sold to businesses. It's like giving businesses their own social network. Can a social network be built with a SaaS approach? No, it must be built like a consumer app.

This is the sole reason that despite a plethora of community solutions available, the most engaged communities are still on Discord & Slack. These platforms are not designed to run brand communities - but are the de facto choice due to a lack of a better alternative.

- What does a white-labeled platform like Circle get wrong?

A SaaS platform doesn't require iteration. Whereas, a consumer product can't be built without iteration.

A SaaS platform assumes that the customer can be educated, whereas a consumer would leave your app at the slightest hint of friction.

Because these platforms are built like SaaS, there's very little consumer-side feedback & iteration that went into these. This is why most of these platforms end up serving as a membership site, and not a "true" community platform.

What do Slack and Discord get right that these guys get wrong?

I am sure you would have experienced Slack at some point in your life.

Most people joined Slack as it was an office communication tool. All your interactions with your peers were hosted there and you had no option but to interact there.

Over time what started to happen was that Slack became a sort of a network of people who interacted with each other for shared purposes.

The network of people interacting with each other became so much more valuable and this was what made people stay on Slack. Slack, which was just an office communication tool, became a community tool.

More and more communities started shaping up on Slack and it became all about interactions between people. “Come for the tool, stay for the network” is the concept that led to Slack becoming such a huge wave.

Although the intention was not to facilitate this, consumer-side feedback and iterations led Slack to become a much more valuable tool.

This is one of the reasons why Slack became a “true” community platform. It was built “consumer first” and not as a “community-building tool”.

Slack has a lot of limitations like lack of video interactions, no paid communities, no white-labeling, and a bunch of other more. On top of that, scaling a community on Slack became really expensive because of how their pricing plan is structured. Per new member added your monthly billing on Slack skyrockets.

However, due to the lack of “true alternatives” to Slack, massive adoption happened.

Discord was built for gamers as a tool to interact with each other and stream games.

The initial users of Discord were the ones who came in for the gaming experience but stayed for the network of people who shared similar interests.

Soon it developed into a community-building tool because some people saw the value of hosting communities directly on it due to the consumer-side features it provided like audio chats, live streaming, and forums.

It was not built with the intention of building a “SaaS for community-building” but was built “consumer first” as its initial target audience was gamers.

Discord also has a lot of limitations for creators like “no white labeling ability, no paid community feature, issues in the scalability of audio/video” and a bunch more. Again, due to a lack of “true alternatives”, Discord became the first choice as a community-building tool post-pandemic.

We hosted our 50000+ member community on Discord at the start of the pandemic.

Due to so many limitations of Discord -like notification system, no paid tiers, not built mobile-first, hard to understand UX (user experience), we started building a true “consumer social app” for creators’ communities.

When we started building Scenes, we built it as a “consumer social app”.

The initial features in the platform solved all the problems we faced on Discord as creators and community builders. We built an easy-to -understand UX (user experience), mobile-first experience, audio/video capabilities, real-time chat rooms, notification system optimised for engagement, and allowed people to host their communities inside our app.

Over time, our platform incorporated the feedback loops and became a truly “consumer social app”. It solved all the limitations of Discord, Slack and, Facebook Groups.

Before launching our offering to businesses, we tested our platform and its abilities by hosting one of the biggest online events in India on our platform “All about Money”.

‘All About Money 2021’ hosted 13,000+ members concurrently in the Audio/Video channel aka stage.

With this, we had built a platform truly “fulfilling the needs of the consumer” and “built with the end consumer” battle-tested for scale.

With such a “robust community-building platform” built for the end customer, a lot of businesses needed Scenes as a platform to host their communities.

We then added white-labeling capabilities ( the ability to put your own branding and paint your own colors) and made the switch to B2B (business to business).

We have now built a true B2B2C platform built to engage with the end customers a.k.a your community members and students.

• Mobile-first - it’s 2022 and ~65% of internet users use the internet primarily on their phone. Keeping this in mind, we built Scenes mobile-first and built out the web version later.

• Notifications are optimised for stage (voice and video) activity. You’ll know when friends or community leaders are speaking on stage. Less noise that way.

• You can create formal events on the calendar channel and people can set reminders for them - which syncs with their Google calendar.

• We made the UX as simple as possible, swapping out Discord’s gamer theme for simple white. We stripped out anything that has a possibility of causing confusion.

• We made roles and permissions that are brain-dead and easy to use. Just select a role (say student, teacher or admin) and choose from a list what permission that role has in a channel.

• We added a coin system for every community for incentivization and rewards.

We have built a community platform keeping the needs of end consumers in mind and solved the limitations of Slack and Discord. Since engagement sprouts spontaneously, we understood that a custom mobile app is critical to driving your community and focused all our initial efforts on perfecting the mobile experience.

Book a call now to see how we can help.