Top 4 Platforms To Run A Cohort Based Course (2022 Comparison)

Cohort-based learning became a new normal post-pandemic. However, the tools of the past didn't have the right features to host them. Here is the ultimate tools list to host your cohort in 2022. 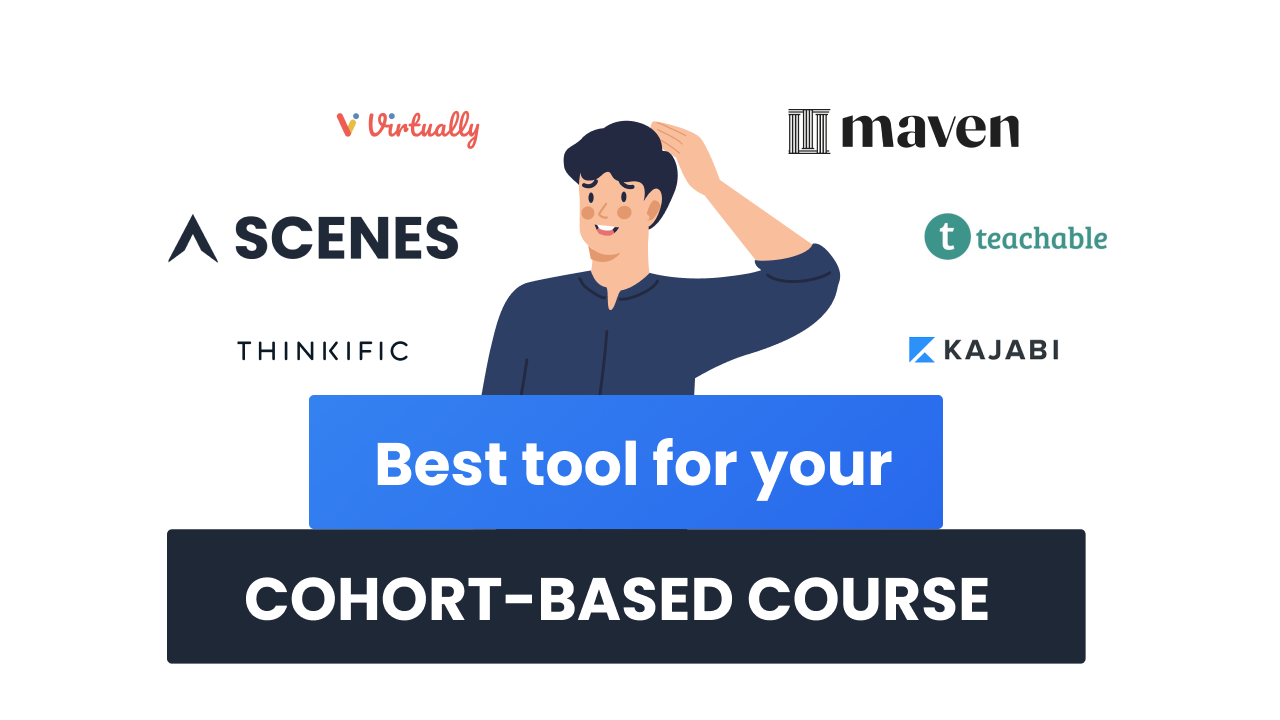 Pandemic changed everything about everything. One of the biggest impacts was on education. Many pre-existing players (like Udemy, Coursera, brick-and-mortar institutions) lost relevance and many new institutions rose to prominence.

‍What caused this to happen?

With the pandemic, all education moved online - there was no other choice.

It was a whole new battlefield for traditional players, who didn’t know how to curate a learning experience online. They took whatever was available and whatever everyone else was doing - hence, Zoom classes became the norm.

For those established on Udemy and Coursera-like platforms, completion rates were always a problem. It manifested itself as a bigger problem because of screen fatigue. People from all walks of life were glued to screen and video calls all day - it was tiring. Pulling off extra hours to focus on pre-recorded lectures became an overkill.

Content creators. A tribe of people who post content on social platforms and garner the trust of big audiences. These folks know how humans behave online. Online is their home ground.

While everyone else flopped, creators found a way to monetise their audience by selling online courses. In order to make the experience more conducive for their audiences, they experimented with a bunch of formats.

And, eureka! There emerged a format, that of live courses + communities now popularly known as “cohort based courses”.. Course creators saw unprecedented completion rates there.

‍How does a “cohort-based course” work?

‍A CBC runs in batches, opposed to a self-paced course, where you can sell as many course units as you want, because the viewer has to consume the content at their own pace.

In CBCs, there’s a cap on the intake of students you can take per batch - for the same reason your classroom would cap at 60-100 students.

Cohorts replicate the classroom vibe, but online. Students have each other for accountability and competition. They feel like a part of their identity belongs to the batch that they have enrolled for.

The classes are held live - with real-time interaction amongst students & instructors. There is a possibility of organizing students into teams.

When we ran cohorts, we also enabled real time-audio for students. And every now and then, because of which as an instructor, I saw teams sitting together on voice chat trying to crack their assignments together. It literally felt like college.

Cohorts facilitate cross border learning and are slowly becoming a major highlight of many students’ lives. They typically have up to 500% higher completion rates than self-paced courses - and because of this outcome, creators are able to charge anywhere from $300-$5000 per student per cohort (averaging 8-12 weeks).

Having run a cohort myself and personally mentoring over 500 students with a >65% completion rate (avg cohort length ~16 weeks), I would love to help you run one yourself. The biggest hurdle is in choosing the right tools. Since the trend is new, there are a bunch of unpolished and incomplete tools available out there. Picking the right platform to run your cohort is make or break for student experience (as well as your earning potential).

3. Kajabi, Thinkific and Teachable (all of which belong to the self-paced learning era)

Maven was one of the first movers in the space. They launched with a star-studded line up of creators like Sam Parr, Nir Eyal, Li Jin, etc. who have a big social following.

However, they’re a marketplace - which means, you won’t have full access to your data, your brand won’t show, you’d compete against plenty others, and you’d be one of the many options available on the platform. This hurts because you’re at Maven’s mercy - it’s good for a start, but very dicey to sustain as a long-term business.

Maven is best suited for very popular creators who want to experiment with course creation. These creators are not looking to build an academy business out of their course since they’re mere instructors on the platform.

TryVirtually positions itself as a student relationship manager software that’s aimed at reducing drop offs. There is no mention of cohorts or community upfront - but that’s what I’ve seen a few creators use it for. TryVirtually reminds me of a run-of-the-mill LMS, but with a few integrations with Google Calendar, Zoom, etc.

If you are planning to host events or one-off workshops, then Try Virtually should be your pick. It is best suited for one-way interaction events like conferences, lectures etc. You can’t sustain a cohort that spans across multiple weeks and months on it.

Kajabi, Teachable & Thinkific are platforms where course creators of the pre-pandemic era hosted their courses. These platforms are not marketplaces (unlike Udemy). They’re whitelabeled and allow your business to wear its own unique look and feel. While experimental instructors went to marketplaces like Udemy, those running a serious coaching business would come onto these platforms.

They were the heroes back then - let’s discover how they’re keeping up when it comes to live-learning & cohort-based courses.

3.4 Who are Kajabi, Teachable & Thinkific for?

These platforms are suited for someone who wants to make $50 - $150 per student by selling pre-recorded courses. These courses sell because they’re priced low - and hence chances of repeat purchases & referrals are also low - because student outcomes are pretty low.

It’s like selling a book - your job is over once it’s sold, very few buyers will ever read the whole thing. Whereas when you’re running a cohort, you’re actually running an academy (and hence earning more).

Scenes was built ground up for learning communities. Despite an abundance of tools to run cohorts, the creators with serious intentions to run a cohort found themselves flocking back to Discord. Why was this happening?

This was because the user experience of actually using the other platforms is bad. They’ve not nailed student-to-student (or member-to-member) interactions because it’s hard.
Before building Scenes, we too ran our cohorts on Discord. While it was the best that was on the market, we still had our gripes with it.

Here are some of the issues we faced:

1) Our audience was being shared with everyone else (because while they’re on discord app - they can be a part of n other groups),

2) It was not white-labeled

4) We had no data ownership (you don’t know who your members are - all you’ll ever see is numbers & charts on analytics).

These 4 aspects are essential for any business.

Without them it’s risky to house your members anywhere, because your community is everything for your business. Which is why we decided to build Scenes for cohort-based & live-learning.

At Scenes, we were the first movers in the space of “cohort based courses” / “community-led learning”, and we built the platform to solve that void, from day one.

It’s by far the most complete tool to run your online academy, the way it’s supposed to run in 2022. We’ve been there, done that. ‍

Book a call today to exchange notes and see how we can help.