Not sure how to grow big on YouTube? Read the top five tips that creators can use to up their content game and make it big in the creator world. 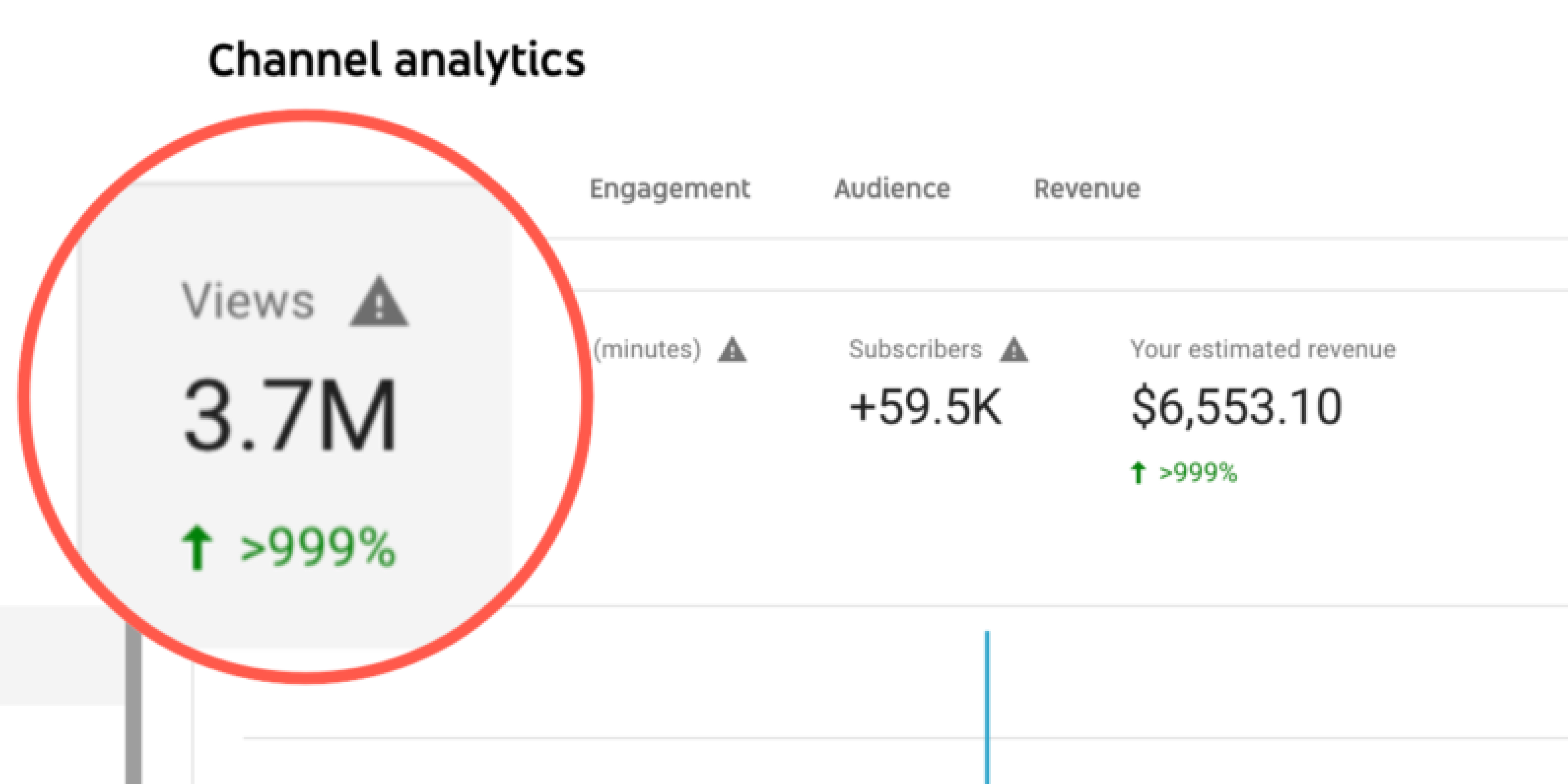 While you can build an audience on Twitter, Instagram, TikTok, etc., my suggestion is to use YouTube. YouTube is the one platform where it's still possible to grow in 2021 (without dancing) if you play your cards right, and we're here to break it down. Follow this fool-proof strategy to create really good content and grow your channel. We've succeeded multiple times on YouTube ourselves, so this isn't commentary — we've lived this.

We’ve scoured through a bunch of research papers to find a way to hack the YouTube algorithm. Did we manage to do it? You bet. Here are a few key takeaways:

When we say goods, we mean subscribers. They’re a lot more important than the other superficial stuff (likes, comments, shares etc.). That’s right. For all the talk about going viral, it isn’t that useful if your goal is to be a creator. If a user watches a video of yours that has 5 million views and does not subscribe, there is absolutely no guarantee that your next few videos will be shown to them. Because they have watched one of your videos, the recommender might occasionally show them another one, but if they don’t subscribe to that one either (or have a bad watch time on that one), you are done. You will not be shown to that user again.

This means that you should absolutely be trying to get a sub on every video you put out. Also, you should probably delete or private all of the videos in which you have poor watch time. This is to improve the chances of your videos being shown to a particular user. Remember, if they watch one video (with high watch time) and don’t sub, then the YouTube algorithm might show them another video of yours. If this second video has low watch time, then you will disappear from their recommendations.

I’ve seen good creators put up 2-3 boring videos in between many very good ones. If they are unlucky and these boring videos are shown to users who have watched a good one, then they risk losing a permanent sub. I’ve made this mistake too in the past, by shitposting in between really good videos with high watch time.

Tip #2: Get a toehold with another creator

Collaborative filtering can be hijacked by, well, doing collaborations. If I collaborate with YouTuber Sid Warrier, then watchers of Sid Warrier's channel will see me and many of them will go watch at least one video from my channel. This tricks the YouTube algorithm into creating a CF recommendation between our channels.

Most good creators know this instinctively. Here’s a 100k+ Indian creator wishing to be anonymous indirectly telling us to collaborate with or diss other creators:

The channel Prakhar Ke Pravachan is a great example of this concept, growing from 0 to 100k subscribers by collaborating with everyone from Shwetabh Gangwar (1.24M subscribers) to MC Stan. Combined with clickbait thumbnails and high retention content, plenty of roasts on popular YouTubers, Prakhar has played to the algorithm’s sweet spot.

Dissing another creator also engages the CF algorithm because existing watchers of A will almost always watch a diss/roast of A on another channel. This creates a really good situation for CF algorithms to begin their work creating an association. I would only recommend this if you care about views more than reputation, though. Paddy Galloway grew pretty much doing this.

Sure, some of us might find clickbaits a little cringey. But you gotta do what you gotta do. CTR is quite important to earn a click. Which of these thumbnails below do you think has higher CTR?

The one on the top has 2x the CTR when compared to the other one. It’s obvious it would win a heated thumbnail battle. The learning? Get a good thumbnail designer. Clickbait with a great thumbnail and title, but also keep retention (watch time) very high. The best way to think about it is to make your video less boring.

If you look at the engagement tab of any video’s analytics, you’ll notice where drop-offs happen. What you’ll clearly notice is that maximum drop-off happens in the first 20 seconds. This is true for all YouTubers, small and big. Most drop-offs happen immediately.

In fact, Mr. Beast has gone on record multiple times and said that he spends one entire day shooting the intro for his videos. He knows that the intro is the area with the highest drop-offs and puts immense focus here by capturing attention before a drop-off.

YouTuber and investor Garry Tan understands watch time and an exciting intro too:

There’s a difference between Watch Time and % of Video Watched. If you are putting up a 4 minute video and have 90% retention, that’s probably less important than a 10 minute video with 60% retention. YouTube cares more about the total amount of time watched than the percentage of the video watched.

This is the main reason live streams aren’t the greatest in the beginning, if your goal is to be recommended often by YouTube. When live, it works well, but after the video is done, you have to mercilessly cut out the boring parts.

But there is a flipside to this. Once you become a large creator, there is no better way to do retention than to go live. Live works best when you already have a large following. People come for your personality, so live is a great format to keep your existing followers engaged. You essentially become a late night TV show. AlgoTransparency.org notes which YT channels get the largest number of recommendations and you can see the ones with strongest recommendations mimic live TV/news from the days of television. People probably watch this while eating dinner so have insane watch time and don’t click away.

The reason I don’t recommend livestreams to small creators is that it doesn’t work until the audience fully trusts and knows you. If you’re small, livestreams are the worst way to grow. If you’re large, there’s no better way to earn massive watch time and become a dinnertime brand.

A lot of top creators ask new creators to “stay consistent”. Actually, consistency is not what drives recommendations. It’s the fact that the YouTube algorithm loves recommending fresh content. And you can only be fresh 24/7 if you’re putting up content regularly. In fact, posting fresh pieces of content gives you yet another signal that is in your control when it comes to the algorithm — this is the path for the user to discover your old pieces of content. By first watching one of your fresh videos, the recommender starts showing them your older videos.

This clarification on consistency also applies to creator burnout. Creators are afraid of taking breaks because they think that consistency drives the algorithm and they must create frequently in order to be recommended more to their own audience. This is not true — YouTubers can take breaks. It’s just that their channels might not grow as fast during the break and their audience might forget them. The algorithm isn’t explicitly penalizing them. Susan Wojcicki, the CEO of YouTube, has gone on record very recently to say that creators aren’t penalized for taking breaks. Watch the video here.

Five years ago, producing good content with a clickbait thumbnail was good enough to get views and subs. It’s a little more difficult today; but definitely not impossible. Focus on your strategy, and keep looking for ways to improve it. You’ll be pulling in 100k subs in no time.

Many creators are looking beyond social media. They have started creating communities to cater to a filtered subset of followers. Creators have designed it to be personal & more engaging, and in turn, more monetizable.

They lack specialized tools for interactive community functions. This includes two-way messaging, P2P discussions, courses, gated events, and so on.

Followers on social media generally pay creators via their attention. For example, ad revenue on Youtube or promotional posts on Instagram. Moreover, since the platform owns the demand side, creators find it difficult to negotiate earnings. Creators hence are moving their true fans elsewhere. This will allow them to monetize their followership better.

So, there you have it. Our tried and tested strategy to grow an audience on YouTube. We hope that this article has helped you understand how to revamp your YouTube content. If you want any help, shoot us a message. We’re here for you.